How I Came to Change My Mind on SSU: Part 6. Back to the Bible 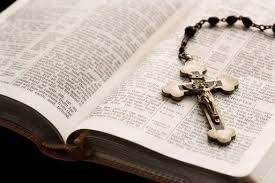 Last May I began a series of blog posts “How I Came to Change My Mind on Same Sex Unions.” For a variety of reasons, I set that series aside for much of the summer. I am now resuming that series.

To recap, I began expressing some of the obstacles to my change of mind.

I also jumped ahead, given the approach of the General Convention of the Episcopal Church, and expressed my view that same sex unions might not be exactly the same thing as marriage between a man and a woman.

And I wrote some thoughts on interpreting scripture in which I proposed what I think is a biblical way of reading the Bible which makes the love and mercy embodied and taught by Jesus the measure of interpretation. Thus it is faithful to seek an interpretation of scripture that is the most merciful and that leads us deeper into love. And I showed that this is not a new idea, but has precedent elsewhere among important Christian theologians.

That is where I stopped. I still haven’t looked at the particular passages of the Bible that commonly come into play when Christians engage questions raised by the reality homosexuality. In coming posts, i will be reviewing that much traveled territory. I don't know that I have much that is new to add, but I will offer interpretations that I find persuasive. But, before I do that, I want to say a bit more about my approach to the Bible.

In a recent post not linked to this series, I referred to a study guide on understanding and interpreting the Bible: The King or a Fox: Configuring the Mosaic of Scripture. In that study guide I point out that there is no one official, God-given way of understanding of what it means for the Bible to be inspired or how to interpret it. And I acknowledge that faithful Christians have come to different conclusions interpreting the Bible on significant issues (I offered more examples of this in the introduction to another study guide, In Dialogue With Each Other). I then offered some criteria for discerning more faithful from less faithful interpretations of scripture.

I am reviewing these, because I want to acknowledge that I am advocating a particular approach to the Bible. It is not the only approach. But, as I said, I think is a biblical way of reading the Bible which makes the love and mercy embodied and taught by Jesus the measure of interpretation. Thus it is faithful to seek an interpretation scripture the most merciful and that leads us deeper into love. This is not a new idea or a "liberal" idea, but has precedent elsewhere among important Christian theologians from the early church through the Reformation.

Long ago God spoke to our ancestors in many and various ways by the prophets, but in these last days he has spoken to us by a Son, whom he appointed heir of all things, through whom he also created the worlds. He is the reflection of God’s glory and the exact imprint of God’s very being, and he sustains all things by his powerful word. When he had made purification for sins, he sat down at the right hand of the Majesty on high, having become as much superior to angels as the name he has inherited is more excellent than theirs. (Hebrews 1:1-4)

There is much we do not understand about the Bible or life in general,

but we do see Jesus, who for a little while was made lower than the angels, now crowned with glory and honor because of the suffering of death, so that by the grace of God he might taste death for everyone. (Hebrews 2:9)

It is Jesus who is the Word of God (John 1:1-18). The Bible is the word of God inasmuch as it points us to and reveals Jesus. It points to the way, the truth, and the life that Jesus is. So, in the next post I will begin with Jesus.

Previous: Part 5. Why I Am Disinclined to Vote for Revising the Marriage Canon