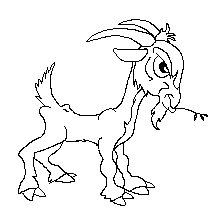 This is the story of First Goat. First Goat lived long ago in the before the before time. He lived there, just north of south and little east of west, with all the other first animals. There were First Dog, First Horse, First Elephant, First Chicken, and all the others. And they all got along. First Rabbit would go for walks with First Fox without any worries because First Rabbit knew that First Fox had a taste for broccoli and not rabbit stew. Even First Mosquito preferred fruit juice.

The world was new. It was so new not everything had happened yet. And not everything that had happened had happened completely. Things had not yet stuck in their final place. Sometimes the grass would start out green in the morning but turn to purple around noon. It usually turned green again before night – but even night sometimes came early and sometimes came late. Sometimes the sun rose in the east, but sometimes it rose in the north. Things were still new. They had not stuck.

Some things were so new they had not happened yet at all. One day, the first rain fell. This surprised the first animals. But they found it refreshing. They were dry, dusty, and dirty. They needed the first bath. As the rain fell on their noses and on their tongues, they became thirsty. The first puddle formed. The animals gathered around it. First Goat was surprised to see the reflection of the beautiful blue sky in the water. The reflection was so clear, the puddle seemed to contain the whole sky.

Suddenly, First Goat remembered his thirst. Afraid the other animals might drink before he did, he

pushed them out of the way, butting and kicking. He began to gulp furiously. But remember – everything had not yet stuck. Would you believe First Goat gulped so fast and so hard that the sky’s reflection came unstuck he drank it up right off the puddle? And now First Goat was full of the reflection of the sky.

With the sky in his belly, First Goat became very, very, very hungry. He began to eat and eat and eat. But he could not get full. After all, how can you fill the sky? He ate grass, he ate bark, he even ate bugs – but you can’t fill the sky with grass and bark and bugs. He even ate the wrapper of the first Twinkie – left on the ground by First Litterbug.

No matter what he ate, nothing could fill the emptiness. He tried distracting himself by singing and dancing and playing games with the other animals. But he was still hungry and the empty sky inside would rumble and thunder. He tried to keep busy. He worked harder and longer. He built the first patio. Still he was hungry. He still contained the empty reflection of the sky.

And so have been all the goats that have come after First Goat. They still eat anything and everything. They still make noise all the time and keep moving, trying to satisfy the empty sky inside.

Humans are like First Goat. We experience a great emptiness, emptiness as big as the sky. We are full of the reflection, not of the sky, but of God. We are hungry – hungry for God. Like First Goat, we sometimes try desperately to fill that hunger with everything but God. We buy more and more stuff. We try to lose ourselves in work. We try to distract ourselves with play and entertainment. We move from place to place and from relationship to relationship. But we remain empty and restless.

As St. Augustine said, we are made for God and our hearts are restless until they rest in him. Our hearts are empty until they are filled with God. Try as we might to fill it with activity, things, or people, only God can fill our infinite emptiness. Activity, things, and people can distract us, can even numb us enough to forget the deep emptiness inside for a while. But they cannot fill us. They cannot satisfy. God created us for himself and God alone can satisfy us.