Greetings, favored one! The Lord is with you. 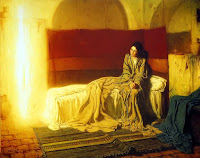 “Greetings, favored one! The Lord is with you.” Can you imagine what it would be like to have a messenger of God show up in your room and speak these words to you? (Luke 1:26-38)

I love this painting of the Annunciation by 20th century African-American painter, Henry Ossawa Tanner. I especially like the way the angel Gabriel is represented. Rather than a man with wings, here we have a beam of light. It has about it something of the eerie mystery that I expect comes with such an encounter with the Holy. It reminds me of the way C. S. Lewis represents angelic beings in Out of the Silent Planet (writing after Tanner painted, but as far as I know unaware of this painting). Except that in Lewis’ telling, the “eldila” appear slightly off kilter – but this is because it is our world that is askew being bent by sin.

I also appreciate that Mary looks more like a young Mediterranean peasant girl than in most renditions. There is a gritty realism to it. She looks like maybe Gabriel woke her up to greet her in God’s name. Her bed is unmade. And she really looks like she is perplexed and pondering what sort of greeting this might be.

And what a greeting it is, “Greetings, favored one! The Lord is with you.” What an affirmation of God’s care and delight. Insignificant though she might have been considered in her society, God notices and cares. However unimportant she might have thought herself to be, God delights in her. God favors her. It is the word we all long to hear.

But there is more to God’s favor than affirmation. When the God Mary knew through the stories of her people favors someone, it involves a call. God favored Abraham. God favored Moses. God favored David. God favored the people of Israel. The affirmation in every case was accompanied by a call to participate in God's mission. And so it is with Mary. No wonder she pondered what sort of greeting this might be.

And the part she was being called to play in God’s mission of redemption was daunting indeed. Which is why the other part of the initial greeting is just as important as the affirmation and call of God’s favor: “The Lord is with you.” Much is being given to Mary and much is being asked of her. But the one who has favored her is also with her to give her strength to see it through. And nothing will be impossible with God. The angel continues, “Do not be afraid, Mary, for you have found favor with God.”

Still, the angel – along with angels, archangels and all the company of heaven – awaits her reply. Will she dare to receive this word in her heart? Will she dare to conceive this Word in her womb? With Mary’s response, “Here am I, the servant of the Lord; let it be with me according to your word” human willingness is freely united with the will of God. Perhaps Tanner is right to have Gabriel beaming perpendicular. Perhaps in this one moment, in this room, with the response of this young woman, hope and history rhyme, heaven and earth are in sync, and the world is unbent. And the Baby she will bear will be the Unbent One, perfectly embodying the peace and joy of God’s favor.

The story doesn’t end there of course. Mary’s role in the story will get complicated. There will be confusion and heartache. But the Lord will be with her along with God’s favor.

And so it is with us. Given her role in the story of our salvation, Mary is particularly favored and we honor her for that. But Mary is also considered the prototypical disciple – the elder sister of all believers. If she is, then we should be able to hear the word she heard as being spoken to us as well. What if we knew ourselves to be addressed every morning with, “Greetings, favored one! The Lord is with you” and “Do not be afraid for you have found favor with God.”? If what Christians believe about Mary’s son is true, then that is precisely what God is saying to you and to me each day. Whatever else the voices around us or within us are saying or not saying, God has declared his favor toward us in being made flesh. In spite of the bentness, in spite of sin and brokenness, God is with us and has addressed all that is bent in the world and in us.

As with Mary, God’s favor toward us is also a call to mission – to love God and to love and care for one another, to be bearers of forgiveness and healing. And, as with Mary, all the angels in heaven rejoice when we respond, “Here am I, the servant of the Lord; let it be with me according to your word.”