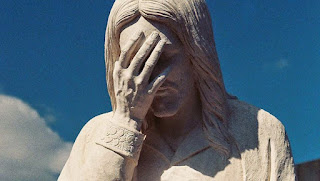 It was a tough week for religion in the news. On Monday, another Palestinian suicide bomber blew himself up in an attempt to maim or kill others. Then, there were Protestants verbally harassing and stoning little Catholic girls on their way to school in Northern Ireland. The Taliban Islamic government of Afghanistan was also in the news bringing some relief workers to trial, accusing them of seeking to spread Christianity. And then yesterday, we heard about rioting in Nigeria between Moslems and Christians in which at least 50 people have been killed so far. It makes you wonder if you want to have anything to do with religion or god stuff if it’s that problematic. Maybe those who say that religion has done more harm than good in history are right after all.

I’m wondering because in this morning’s gospel Jesus calls us to a radical kind of loyalty. What kind of loyalty is he calling us to and to what? To God? What kind of god? No doubt each situation is more complicated than this, but in one way or another in the past week we have seen people kill or attempt some sort of violence in the name of some god. Or, at least, loyalty to an idea about god was involved. Is it right to do such things, to kill or be killed in the name of god? The question sounds preposterous to us. One reason, it sounds preposterous to us is because in western society we have become immunized to the power of faith. Culturally, and all too often, personally, we tend to think of religion as a sort of hobby, one step above stamp collecting or bird watching. Some people are into stamp collecting. Some people are into bird watching. Some people are into Christianity. Others are into Buddhism or something else. But it is all more or less a matter of private preference, a hobby; certainly nothing you would kill someone over, nothing you would risk dying for. Don’t those people in Palestine and Northern Ireland and Nigeria and Afghanistan and everywhere else get that? Don’t they understand this is not a matter of life and death?

Or is it? Is it wrong to kill or die in the name of God? The more I thought about it this week, the more it occurred to me that it is actually a rather interesting question. I’m not sure the answer is altogether obvious. If God is the ultimate reality, the ultimate and final good, what else would be worth killing or dying for? If I won’t kill or die in the name of God, why would I kill or die for the sake of something less? If not God, what about country? What about ideology, justice, or freedom? Or, as Jesus questions so offensively this morning, for the sake of family? For whom or what are we willing to kill? For whom or what are we willing to die? What is worth the ultimate sacrifice of my own life or the responsibility of taking someone else’s? To what to whom or to what do I pledge such allegiance? If we can answer that set of questions we will get pretty close to what “god” really is for us.  Whatever it is to which I am willing to give over that kind of allegiance or loyalty, that kind of sacrifice, is my god whether or not I call it religion. Is it O.K. to kill in the name of God?  Ultimately, it depends on what god we are talking about, what god we are seeking to follow and please. To what or whom do I pledge such allegiance?

Since their inception, nations and governments have demanded the ultimate sacrifice from their citizens. When your nation says go to this place and kill these people, you are expected to obey – to kill and to risk being killed. Others have done the same in the name of abstract ideas such as justice and freedom. More often than not, a varnish of god-talk is usually added to all of these to lend legitimacy. I don’t know if the suicide bomber did what he did for God or justice or revenge or some combination of these. I don’t know enough about Islam to know how he might have thought he was pleasing to the God he worshiped.  I do know that not all faithful Moslems would agree with him.

To die in the name of Jesus and the God we know through him is a different matter. In fact, that is the point. When he says, “Count the cost. Decide now whether or not you are going to be able to finish the building,” that’s what he has in mind. Following Jesus into the heart of God is no hobby. In this morning’s reading from the Gospel of Luke, Jesus is on his way to Jerusalem and he knows what is in store for him there. He is on a mission, but it is a mission that he knows ends only one way. It ends in his death. He is on his way to Jerusalem, the center of power – political and religious power – and he intends to throw a wrench in the works. He intends to throw a wrench in the usual way of things, the way of intimidation and oppression, the way of coercion, the way of control, the way of violence. More than throw a wrench into the works, Jesus intends to be the wrench in the works to upset the usual machinery of violence and bondage.

To those who are following him, he lays out his agenda pretty clearly. “If you think you are following me in some sort of victorious parade in which we are going to march into Jerusalem, take things over, kick the Romans out, and set the temple worship straight, you’ve got the wrong guy. If you want to follow me into Jerusalem, take up the cross and follow me. Take up the cross and prepare to die.” To follow Jesus is to follow him in that mission, the mission to upset the usual way of things – the way of things we see in the nightly news and in the morning paper. Sometimes that might mean actual martyrdom.” There have been places and times when people have literally died for the sake of that mission. There are people in the world now for whom that is a day-to-day possibility. But for most of us, most of the time, it is the daily martyrdom of dying to self and learning to live in love for the other. That, too, is taking up our cross and following Jesus. As Dietrich Bonhoeffer wrote, “When Christ calls a man, he bids him come and die.” Nowhere does he bid us to kill.

There is only one cross. Sometimes people talk about “their cross to bear” as if each of us had his or her own individual cross. “I have this problematic child and she is my cross to bear.” Or, “I have this illness and that is my cross to bear.” Or, “I am in this relationship where I am being abused and that is my cross to bear.”  That is a misappropriation of what Jesus is calling us to. Taking up your cross and following Jesus is not resigning yourself to being abused and trapped in a situation beyond your control. It is a call to servanthood not servitude. Taking up the cross of Christ is choosing freely to follow him in his mission of resistance, his mission of proclaiming mercy and grace, peace and justice. There is only one cross, and it is the cross of Christ.  Ultimately, he bears that cross with us.  He is on the cross with us and before us.

Jesus, in this morning’s gospel, challenges us to put all other loyalties in the context of his mission, all other loyalties in the context of the cross.  When Christians marry, they marry with that mission in mind. Marriage is one place and one way we can serve the mission. We can learn to love.  We can learn to give totally of ourselves. We can create space where the stranger is welcome and generosity is given. If we choose to be single, we choose to be single for the same reason, because sometimes being single is the best way to serve the mission. If we choose to have children that, too, is not something that just happens. That’s something we do because having children is a way of witnessing to the mission, to the kingdom, and to raise up new disciples, new witnesses. All loyalties – families, friends, nation – are redefined in the context of that ultimate loyalty to the way of Jesus, the way of the cross. Jesus does not say focus on the family; he says focus on the cross. And there are no precious moments on the way of the cross. Bonhoeffer wrote, “The cross of Christ destroyed the equation that religion equals happiness.” That might be overstating the case just a bit. As we sang in the opening hymn (483), the cross is also our life and our health. It is the way of grace, the way of joy. But certainly the call to take up our cross destroys the equation that religion, at least religion that is true to Jesus Christ, equals sentimentality and nostalgia. It also destroyed the equation that religion is compatible with the way of violence.