How I Came to Change My Mind on SSU: Part 7. What Did Jesus Say? 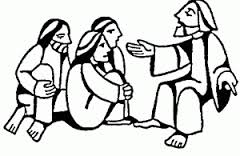 The Church has behind it 2000 years of reflection on sexual morality. As an Anglican with a catholic bent, I take that tradition seriously and receive it with respect and gratitude. But, I do not think that being faithful to the tradition necessarily means always and only repeating what has already been said. Sometimes some things need to be re-examined. For the reasons I have pointed out in earlier posts in this series, I am convinced that at the very least the testimony of gay and lesbian Christians calls us to be willing to take another look at the Bible and tradition when it comes to sexual promise and discipline for those attracted to the same gender.

To do that, I suggest that we start with Jesus. What did Jesus have to say on the issue? Not much actually as it turns out. In fact, he says nothing explicitly about it. But, we need to be careful not to jump too quickly to conclusions about what that might mean. It could mean:

·        Greek and Roman Gentiles were prevalent in Galilee at the time of Jesus. Some expressions of homosexual behavior was sometimes accepted among them as OK. And Jews thought this was typical of Gentile moral lawlessness. Jesus could have made a point by explicitly condemning it. But, he did not.

This point has some merit. If our Lord had wanted to be absolutely clear on this he could have been. However, the mission of Jesus was a Jewish movement and Israel was his primary audience.

·        Perhaps, given the contemporary understanding of the Jewish scriptures, any sexual relationships between people of the same sex were considered so obviously wrong it was unnecessary to mention it specifically.

·        It was not a debated question among his Jewish contemporaries as were other issues like what constitutes a legitimate reason for divorce, so it never came up.

These points have much to commend them. On the other hand, there were other moral issues that would have been considered obvious and that were not debated which Jesus did mention. For example, none of his Jewish audience or opponents would have questioned the wrongness of murder or adultery. Yet Jesus lists them among the evil intentions that come from the human heart. In fact, he intensifies both saying that lust is adultery of the heart and anger is murder of the heart.

It is not obvious what Jesus meant when he said, "I have come not to abolish [the law] but to fulfill.” I will look more closely at Matthew 5:17 in another post.

·         Jesus might have understood sexual relations between two men or two women to be included under the broad category of porneia, a Greek word variously translated as “unchastity,” “sexual immorality,” and “fornication” which he lists among the evil intentions of the heart. (Mark 7:21-22)

The meaning of porneia and what constitutes sexual immorality and why needs more discussion. I will address this in a future post.

So, the fact that Jesus does not say anything explicitly one way or the other about sexual relations between people of the same gender does not settle things. still, the fact is that he did not.

There are other things of moral importance that Jesus did not explicitly condemn like slavery (which he seems to accept as given) and abortion to name just two. I suggest that Christian opposition to both of these – where it has occurred – is not based on what Jesus (or the rest of the Bible) explicitly says about them, but rather on the implications of fundamental principles Jesus does explicitly and repeatedly emphasize, e.g., love, mercy, justice, care for the least, and welcoming the little ones.

There are other things Jesus does address explicitly and repeatedly which most Christians have decided do not need to be followed, at least at face value. For example, Jesus explicitly says, “lend, expecting nothing in return” (Luke 6:35). For centuries, the Church took Jesus at his word and condemned lending at interest as sinful. That teaching was rethought and “revised” in the 16th century with the rise of Capitalism as just meaning not lending at exorbitant interest. Why? On what grounds? One can argue that this was a good thing. But it was still a reinterpretation.

Jesus explicitly taught some other uncomfortable things about wealth and possessions that most Christians avoid taking literally (here). And he explicitly taught some uncomfortable things about peace and violence that most Christians also avoid taking literally (here). We need to ask why we take some things Jesus says, and for that matter the rest of the Bible, at face value and why with others we find ways to interpret them differently. Again, we need to ask ourselves about the rules we use when interpreting Jesus and the rest of the Bible.

Though Jesus did not single out same sex relations for explicit comment, he did have some things to say about marriage that might be relevant. I will look at those next.

Previous: Part 6. Back to the Bible
Posted by mattgunter1081@gmail.com at 8:03 AM No comments: