The fate of the country is in God’s hands; it’s honor is in mine. 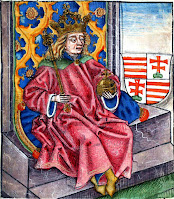 Today is the Feast of Elizabeth of Hungary (1207-1231). She was an impressive woman and I encourage you follow the link to read about her. Elizabeth came from a remarkable family. Her brother, Béla IV (1206-1270), was king of Hungary. He was himself a devout and faithful Christian who eventually became a Third Order [lay] Franciscan. He also uttered one of my favorite lines.

In 1241 the Mongols invade Eastern Europe. When it became clear they were headed for Hungary, King Béla gathered his nobles and ordered them to call up their knights and others so he could lead an army against the invaders. But the nobles balked. Everyone knew by then that the Mongols were invincible and the nobles feared going to war with them. They argued that the king should surrender and let the Mongols have their way. The king responded, “The fate of the country is in God’s hands; it’s honor is in mine.” He challenged the nobles to ride with him for the honor of Hungary. And they did.
I like King Béla’s response, “The fate of the country is in God’s hands; it’s honor is in mine.” I remember it frequently in these challenging days for the Church. Echoing King Béla, I can say, “The fate of the Diocese of Fond du Lac is in God’s hands; being as faithful as I can be in leading the diocese into faithfulness is in my hands. This is true for the leaders, lay and ordained, of any congregation. There are forces at work over which we have no control that make being church difficult. But we do have control over our own faithfulness. Though we hope fuller faithfulness will lead to growth, that faithfulness does not guarantee measurable success. The fate of the Church is in God's hands.
The Mongols did in fact annihilate the Hungarian army in the Battle of Mohi and devastated the country before their unexpected withdrawal in March 1242. But Béla, escaped and survived after the defeat and was able return to the throne and lead Hungary for many years.
The fate of the Church is in God’s hands. Faithfulness is in ours. That is not fatalism. I will continue to do what I can to help congregations thrive and grow. And I will encourage members of the diocese to be faithful disciples and witnesses. We are accountable for that faithfulness. But the fate of the Church is in God's hands.
Posted by mattgunter1081@gmail.com at 10:55 AM No comments: