Centered on Jesus II: Not a Mid-point on a Spectrum 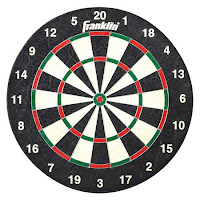 II. What it is Not, Part 2: Not a Mid-point on a Spectrum

To be a radical centrist as I mean it does not mean trying to locate oneself at some mid-point of an imagined right-left spectrum. The idea of such a spectrum along which everything must be placed as more or less Conservative or more or less Progressive (Liberal) is itself an idol that creates a sort of "conceptual trap" – a way of seeing things that so shapes the imagination that it is hard to imagine other ways of seeing.

The truth is there are ad hoc similarities between Christianity and both Taoism and Confucianism. A Christian who converts from either of those might look back and say; “Now I know what that means in the light of Christ” or “Oh, I need to change my mind and behavior if I want to conform to Jesus.” In the end, Taoism and Confucianism have a lot more in common with one another as varieties of the Chinese heritage than either of them has with Christianity which operates under a different logic.

The same is true for the socio-political ideologies of Conservatism and Progressivism which shape the way their adherents engage the world in ways analogous to religious faith. Both are rooted in Classical Western Liberalism (which is why I am using "Progressive" rather than the more common "Liberal" to identify one of its sub-traditions). In this sense, what we usually call “Conservative” is part of this Liberal Tradition as much as what we usually call “Liberal” or “Progressive.” As part of this Liberal Tradition, both Conservatives and Progressives share these tendencies:

* Fetishizing the individual as autonomous and independent

* Fetishizing the modern nation-state as the fundamental and ultimate socio-political reality to which final allegiance is given.

* Making faith primarily a private, personal matter rather than a matter of allegiance to the body of the Church.

* Infatuation with the notion of abstractions, e.g., love, justice, freedom, reason etc, as universally accessible and independent of traditions or particular communal histories and practices.

Given these similarities, from a Christ-centered perspective, ideological Conservatism and ideological Progressivism do not so much occupy opposite poles of a spectrum as they are more like points on contiguous sections of a dart board – like sections 16 and 7 – more or less removed from the center if the center is Jesus Christ.

To be clear, the point here is not that the heritage of Classical Western Liberalism is altogether bad, whether in its conservative or progressive manifestations. Doubtless there is good in that heritage, e.g., the breaking down of a fixed class system, moving toward the social equality of women, the acceptance of ideological and religious diversity, and things like the freedom of the press. Just as there are things about Taoism and Confucianism a Christian can embrace, there are things about the Liberal Tradition in both its more Conservative and it more Progressive forms Christians can embrace. Several of the things just mentioned actually have roots or antecedents in Christianity. And, all things considered, the Liberal Tradition is preferable to illiberal approaches to politics, e.g., Authoritarianism, Fascism, Marxism, ethno-nationalism.

Being a Centrist does not mean trying to be neutral or unengaged with the world around us. Jesus was neither. And centered Christians will have sympathies one way or another. But, we need to be wary of investing too much emotional energy or loyalty in political parties, movements, and ideologies lest our allegiance to them compromise our allegiance to Christ and inhibit our ability to love our neighbor.

If Christians are not suspicious of these loyalties, we will again and again fall into the trap of trying to fit Jesus and Christianity into those loyalties. The result is a fractured and compromised Church with no witness. The religious right seeks to make God, Jesus, and Christianity safe for conservative values. The religious left seeks to make God, Jesus, and Christianity safe for progressive values. The one ends up playing servile chaplain to the red states while the other plays servile chaplain to the blue states. And both end up more or less the chaplains of American Civil Religion. In their utter conformity, neither has a truly prophetic witness centered in what God has done and is doing through Jesus Christ and the Holy Spirit. Because both are content to repeat the prejudices of this world, neither is able to bear witness to the New Creation.

Wary of being drawn off Christ the center, radical Christian centrists will engage Conservatism and Progressivism both critically and sympathetically – seeking such ad hoc congruities as might be found. But it will not accept a view of the world in which they are poles on a spectrum along which Christians must place themselves.

Next: Centered on Jesus III: Jerome the Ciceronian