It is the Worshiping Life that can Transform the World 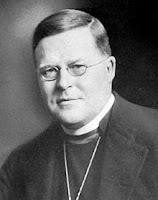 William Temple (1881-1944) as an important theologian and bishop in the Church of England in the first half of the 20th century. He was Archbishop of Canterbury from 1942 until his death in 1944. Here is something he wrote on the connection between worship and engaging in the world:

"This detachment to which the Church is called, but which Churchmen have seldom attained, is not a hermit-like withdrawal from the world; on the contrary it is the way by which the Church may most influence the world.  For the way to spiritual power over the world lies through worship and sanctification.  If the Church is to supply to Christian people the quality enabling them to convert the world, they (or at least a large proportion of them) must be Churchmen before they are citizens, recognizing that their highest duty and privilege is to worship God made known in Jesus Christ, to quicken their consciences by His holiness, to feed their minds on His truth, to purify their imaginations by His beauty, to open their hearts to His love, to submit their wills to His purpose.  Worship includes all those elements.  Worship so understood is the activity whereby and wherein men become more fully incorporated into the Body of Christ, thus enabling the Church to become its true self and to do its true work.

Of course, such worship is a continuous and lifelong enterprise.  To 'go to Church' and there sit, stand, and kneel while other people say things and sing things may be better than nothing, for it is an act of witness; but it is not certain that it is better than nothing, but such a Churchgoer lowers the temperature of the whole congregation.  It is not possible to worship truly while the daily life is far from God; and it is not possible to bring the daily life much nearer to God except by the best worship of which we are capable.

Thus worship is the distinctive and specially characteristic activity of the Church; but then worship includes all life and the moments spent in concentrated worship, whether 'in Church' or elsewhere, are the focusing points of the sustaining and directing energy of the worshiper's whole life.

It would strike many people as absurd to say that the cure for unemployment is to be found through worship; but it would be quite true.

If then the Christian citizen is to make his Christianity tell upon his politics, his business, his social enterprise, he must be a Churchman - consciously belonging to the worshiping fellowship and sharing its worship - before he is a citizen; he must bring the concerns of his citizenship and his business before God, and go forth to them carrying God's inspiration with him.

This is all expressed in the Eucharist.  There we bring familiar forms of economic wealth, which is always the product of man's labor exercised upon God's gifts, and offer them as symbols of our earthly life.  If God had not given to the seed its life and to the soil the quality to nurture it, there would be neither harvest nor bread.  Equally, if man had not ploughed the soil and scattered the seed, there would be neither harvest nor bread.  Bread is a product of man's labor exercised upon God's gift for the satisfaction of man's need.  So is wine.  There are our 'oblations' at the 'offertory' - often also accompanied by 'alms' expressing the charity which seeks to share with others the good things which God has given us.

These representatives of all earthly 'goods' we offer to God in union with the act of Christ at the Last Supper when, in preparatory interpretation of His death, He took the bread, called it His Body, and broke it - took the wine, called it His Blood and gave it.  Because we have offered our 'earthly' goods to God, He gives them back to us as heavenly goods, binding us into union with Christ in that self-offering which is His royalty, so that we give not only our goods but ourselves, and thus become strengthened as members of His Body to do His will in the various departments of our life.

The Eucharist divorced from life loses reality; life devoid of worship loses direction and power.  It is the worshiping life that can transform the world."
– William Temple, Citizen and Churchman (1941)
Posted by mattgunter1081@gmail.com at 8:37 AM