My God, my God, why have you forsaken me?

Last Sunday, many of us heard the Passion of Jesus according to the Gospel of Mark which included this,

When it was noon, darkness came over the whole land until three in the afternoon. At three o’clock Jesus cried out with a loud voice, ‘Eloi, Eloi, lema sabachthani?’ which means, ‘My God, my God, why have you forsaken me?’ When some of the bystanders heard it, they said, ‘Listen, he is calling for Elijah.’ And someone ran, filled a sponge with sour wine, put it on a stick, and gave it to him to drink, saying, ‘Wait, let us see whether Elijah will come to take him down.’ Then Jesus gave a loud cry and breathed his last. (Mark 15:33-37)

Christian Choate’s body was discovered near Gary, Indiana one summer day. He was buried in a shallow grave under a slab of concrete behind the trailer where he once had lived. He had actually died two years earlier. He was only 13.

Those were thirteen years of misery. Years of isolation and neglect. Years of verbal and physical abuse at the hands of his father and step-mother. He lived with them because his mother and her boyfriend had been accused of molesting him.

He was kept home from school and home schooled. The essays his step-mother asked him to write are heart-breaking. She asked to write about "Why do you want to play with your peter? Why do you still want to see your mom? Why can't you let the past go? What does it mean to be part of a family?"

Christian spent much of the last year of his life locked in a three-foot-high dog cage, with little food and drink and few opportunities to leave. He was let out briefly to clean and vacuum. And he endured savage beatings from his father.

One night in April of 2009, Christian was too weak to keep his food down. His father beat him to the point of unconsciousness, then locked his limp body in the cage. The next morning, his sister Christina found him dead.

Christian wrote of why nobody liked him and how he just wanted to be liked by his family. He stated that he wanted to die because nobody liked the way he 'acted.' Christian's writings detail a very sad, depressed child who often wondered when someone, anyone, was going to come check on him and give him food or liquid. Christian often stated he was hungry or thirsty.
[Linkto the news story]

But Elijah did not come for Christian. And we have no knowledge of his hearing God or being aware of God’s presence. Given the constraints on his life, we don’t even know if he knew enough to cry out, "My God, my God, why have you forsaken me?"

It's a story that haunts me and has become a sort of test case or talking about God. Any god-talk  worth the trouble has to take this story and the myriad other stories of human suffering into account.

They are the most disturbing of the words Jesus spoke from the cross. But, for me, they are also hopeful. The truth is I often find it hard to believe in God. Much god-talk strikes me as little more than sentimental fancy. Talk of god in a baby’s smile or the beauty of nature doesn’t quite cut it. Generic talk of “the Holy” or “the Sacred”? I don’t know what that means. Even talk of god as love, by itself, seems to me to too easily slip into sentimentality. All such talk falls flat in the face of the horror of Christian Choate’s story. Or the realities of Syria, the Congo, or Parkland, Florida.

But, this is different. From the cross Jesus cried with a loud voice, "My God, my God, why have you forsaken me?" What are we to make of that? I want to suggest that there are at least a couple of things we can say.

Jesus, in the fullness of his humanity, experiences the horror of being betrayed, denied, and abandoned by his friends and rejected by his people. Jesus experiences all the torture, terror, and tragedy that humanity inflicts upon itself when it turns from God.

And, mystery of mysteries, Jesus, who knew such intimacy with the One he called ‘Father,’ experienced the awful, bewildering silence of God. Even as we remember that Jesus cried out using the worship language of his people as found in Psalm 22, there is no escaping that it was a cry of anguish. We dare not try to get around that.

But there is a second thing. In Jesus, we affirm that God’s very self entered into the darkest depths of human experience. As Madeleine L’Engle wrote,
For Jesus, at-one-ment was not only being at-one with the glory of the stars, or the first daffodil in the spring, or a baby’s laugh. He was also at-one with all the pain and suffering that ever was, is, or will be. On the cross Jesus was at-one with the young boy with cancer, the young mother hemorrhaging, the raped girl [and at-one with Christian Choate and his sister. And even with the broken tortured spirits of their parents]. We can withdraw, even in our prayers, from the intensity of suffering. Jesus, on the cross, experienced it all. When I touch the small cross I wear, this, then, is the meaning of the symbol.

The cross is what makes it possible to believe in God at all. That is on of the reasons this Friday is good.

William Temple, who was Archbishop of Canterbury during the first years of WWII, wrote in Christus Veritas,
The revelation of God’s dealing with human sin shows God enduring every depth of anguish for the sake of His Children. . . All that we can suffer of physical or mental anguish is within the divine experience. . . .He does not leave this world to suffer while He remains at ease apart; all suffering of the world is His.

Let’s be clear. This is not Jesus vs God. This is not God the Father torturing Jesus so he won’t have to torture us. The God we know through Jesus is not like Christian Choate’s father. This is God, the Holy Trinity – Father, Son, and Holy Spirit – working in harmony to address the deepest, darkest depths of human need to bring forgiveness and healing and the promise of restoration.

And we know – thanks be to God, we know – that whatever Jesus experienced in his cry of dereliction, he did not despair and God did not abandon him. We know the rest of the story. We do not need to pretend on Good Friday that we don’t know what happens on Easter Sunday. We know that God was in Christ reconciling the world. Through the cross and resurrection God has come to transform the torture, tragedy, and terror. 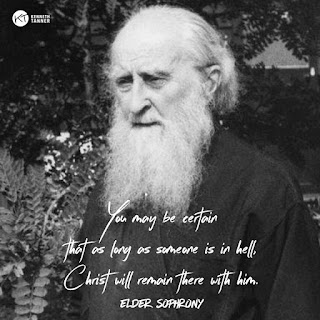 This does exhaust the meaning of the cross. It does not answer all the questioned raised by the hard reality of human suffering. But, we can give thanks that in Jesus’ cry, "My God, my God, why have you forsaken me?" there is the assurance that there is no human experience – not even the appalling, heart-rending experience of Christian Choate – that is finally God-forsaken.

(To be continued on Saturday with Of First Importance)

Jesus of the Scars

Suffering and the Wildness of God