On Giving up Murder, Cannibalism, and Cursing for Lent 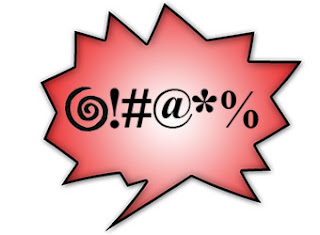 I was taught growing up that we shouldn’t use bad language. That meant we should avoid using a short list of four-letter “curse” words. Indeed, one of the surest marks that one was a serious Christian was the refraining from using such words. And for some, one measure of the goodness of a movie is whether it has “language” in it. But there is almost nothing in the Bible that suggests that such language, even the “F word” is all that bad. There is only one place in the entire Bible that suggests what we usually call dirty words might be problematic: “Let there be no filthiness, nor silly talk, nor levity, which are not fitting; but instead let there be thanksgiving” (Ephesians 5:4). Interestingly, those Christians who make much about “filthiness” do not make so much about “silly talk” or “levity”. I wonder if one of Satan's most profound tricks has been to make Christians so disproportionately squeamish about so-called swearing.

I am not suggesting that we should start casually using the words generally considered vulgar. I am more and more convinced that a fundamental aspect of the deeper holiness to which we are called has to do with the words we use. Wordcare has to do with all our use of language. Among other things, it has to do with the language we use about God. The warning against taking the Lord's name in vain is, after all, one of the Ten Commandments. And it has to do with the truthfulness and integrity of our language generally. Those might be topics for another time. What I’d like to write about now is the significance of how we use words to and about others. The Bible and the Christian tradition have much more to say about that than the seven words you can't say on television.

I suggest we give up murder, cannibalism, and blasphemous cursing for Lent

The language of sarcasm is my mother tongue. I know I need to check it. I am also increasingly aware of how language that dismisses or disparages the other or refers to the other with disdain has become our common tongue. It is common in entertainment and other media. It is frequently present at work and in families. It is endemic in our polarized political discourse. And it is all too familiar in church debates. But, for Christians, it ought not to be so. We are instructed otherwise in scripture, particularly in the New Testament. From the Desert Fathers and Mothers to the Rule of St. Benedict and beyond, the importance of disciplining our speech is a common theme among the saints.

Our Lord famously warns, “You have heard that it was said to those of ancient times, ‘You shall not murder’; and ‘whoever murders shall be liable to judgment.’ But I say to you that if you are angry with a brother or sister, you will be liable to judgment; and if you insult a brother or sister, you will be liable to the council; and if you say, ‘You fool,’ you will be liable to the hell of fire” (Matthew 5:21-22). When we speak to or about others with words of disdain, words that dismiss, words that disparage the other, we are committing a species of spiritual violence that is of the same genus as murder. And it is subject to frightful judgment. Add to that Jesus’ command to love enemies and refrain from judging and one begins to measure words more carefully.

The Apostle Paul also had much to say about our words as well as our behavior toward one another. In his letter to the Galatians, St. Paul resorts to the striking imagery of cannibalism, “For the whole law is summed up in a single commandment, ‘You shall love your neighbor as yourself.’ If, however, you bite and devour one another, take care that you are not consumed by one another” (Galatians 5:14-15). St. John Chrysostom picks up on this in a sermon on Fasting:

Let the mouth fast from disgraceful and abusive words, because, what gain is there when, on the one hand we avoid eating chicken and fish and, on the other, we chew-up and consume our brothers? He who condemns and blasphemes is as if he has eaten brotherly meat, as if he has bitten into the flesh of his fellow man. It is because of this that Paul frightened us, saying: "If you chew up and consume one another be careful that you do not annihilate yourselves."

You did not thrust your teeth into the flesh (of your neighbor) but you thrusted bad talk in his soul; you wounded it by spreading defame, causing inestimable damage both to yourself, to him, and to many others.

I wonder particularly if we would not do well to be less eager to chew on the latest revelation of some outrageous act or word from those with whom we disagree. We could also get over the taste for the put down, for patronizing, and for manipulation. It seems to me that we are often intent on accusing others of biting us even as we are picking the bits of others out from between our own teeth.

In his letter, St. James warns about the tongue, “If any think they are religious, and do not bridle their tongues but deceive their hearts, their religion is worthless” (James 1:26). He goes even further, “For every kind of beast and bird, of reptile and sea creature, can be tamed and has been tamed by humankind, but no human being can tame the tongue--a restless evil, full of deadly poison. With it we bless the Lord and Father, and with it we curse men, who are made in the likeness of God. From the same mouth come blessing and cursing. My brethren, this ought not to be so” (James 3:7-10). James is onto something deeper than just worrying about four-letter words. And it’s not even simply a matter of not saying, “Go to hell" or “Damn you” though either would be blasphemous presumption. All words that destroy, tear down, or dismiss are a form of cursing. And because they disrespect those who are created in the likeness of God, they are a form of blasphemy.

Toward the end of his letter, James summarizes this concern with, “Be patient, therefore, beloved, until the coming of the Lord. The farmer waits for the precious crop from the earth, being patient with it until it receives the early and the late rains. You also must be patient. Strengthen your hearts, for the coming of the Lord is near. Beloved, do not grumble against one another, so that you may not be judged. See, the Judge is standing at the doors!” (James 5:7-9)

Indeed, as James wrote, it ought not to be so. And yet our public and private discourse seems full of verbal murder, cannibalism, and blasphemous cursing. The internet is especially rife with such things across the theo-political and theological spectrum.

Our wordcare both demonstrates whether or not our hearts and minds are oriented toward God and shapes that orientation. If we fear God, if we love the Lord, if we hope for any fellowship with the Holy Spirit; we would do well to take care with our words. And if we believe in the day of scrutiny (Wisdom 3:19), we should forswear murder, cannibalism, and cursing. The Judge is standing at the door and "you will have to give an account for every careless word you utter" (Matthew 12:36). Therefore, “Let no evil talk come out of your mouths” (Ephesians 4:29a), “But, get rid of all such things—anger, wrath, malice, slander, and abusive language from your mouth” (Colossians 3:8). Such language is infinitely more problematic than the usual list of dirty words.

Only What is Useful for Building Up

Finally, it is not enough not to murder, cannibalize or curse others with our words. It would be good for us to commit to speaking in ways that lead to life and peace and encouragement – “only what is useful for building up, as there is need, so that your words may give grace to those who hear” (Ephesians 4:29b). And we might take this to heart, “But in your hearts sanctify Christ as Lord. Always be ready to make your defense to anyone who demands from you an accounting for the hope that is in you; yet do it with gentleness and reverence. Keep your conscience clear, so that, when you are maligned, those who abuse you for your good conduct in Christ may be put to shame” (1 Peter 3:15-16). And this, “love one another with mutual affection; outdo one another in showing honor” (Romans 12:10).

The purity of our lips is about much more than a list of dirty words. The basic question is not which actual words one uses, but whether our words tear down or build up. What is impure is any rhetoric that is disdainful or demeaning of another person – rhetorical murder, cannibalism, and cursing. And that should offend our sensibilities regardless of the actual words used.