2.      On the Christian Creed: Some Questions & Responses

4.      Where thrones shake, the mighty fall, the prominent perish

6.      Charles Grafton: Evangelical at heart, while in belief a liberal Catholic

7.      Phillips Brooks on Jesus' Effect on His Disciples

8.      Centered on Jesus VI: The Impossibility of Religious Pluralism

This is a follow-up to that post:
Of First Importance

10.   Yearning for the vast and endless sea of God

And here are a three others for good measure:

St. Ambrose and the Emperor

More to life than we previously imagined 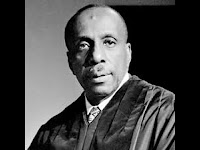 On the Twelfth Day of Christmas:

There is more to life than we previously imagined. Angels hide in every nook and cranny, magi masquerade as everyday people, and shepherds wear the garments of day laborers. The whole earth is brimming with glory for those with eyes to see and ears to hear.
– Howard Thurman, ‘The Work of Christmas: The Twelve Days of Christmas with Howard Thurman’ by Bruce G. Epperly

God took his own medicine

On the Eleventh Day of Christmas:

What does the Church think of Christ? The Church’s answer is categorical and uncompromising, and it is this: That Jesus Bar-Joseph, the carpenter from Nazareth, was in fact and in truth, and in the most exact and literal sense of the words, the God “by whom all things were made.” His body and brain were those of a common man; his personality was the personality of God, so far as that personality could be expressed in human terms. He was not a kind of demon pretending to be human; he was in every respect a genuine living man. He was not merely a man so good as to be “like God”—he was God.

Now, this is not just a pious commonplace: it is not a commonplace at all. For what it means is this, among other things: that for whatever reason God chose to make man as he is—limited and suffering and subject to sorrows and death—he [God] had the honesty and courage to take his own medicine. Whatever game he is playing with his creation, he has kept his own rules and played fair. He can exact nothing from man that he has not exacted from himself. He has himself gone through the whole of human experience, from the trivial irritations of family life and the cramping restrictions of hard work and lack of money to the worst horrors of pain and humiliation, defeat, despair, and death. When he was a man, he played the man. He was born in poverty and died in disgrace and thought it well worthwhile.
– Dorothy Sayers, ‘The Greatest Drama Ever Staged’

Something in the world had been changed.

On the Tenth Day of Christmas:

“Everything necessary has been given us in the Gospels. What is it? Firstly, the love of one’s neighbor–the supreme form of living energy. Once it fills the heart of man it has to overflow and spend itself. And secondly, the two concepts which are the main part of the make-up of modern man–without them he is inconceivable–the idea of free personality and of life regarded as sacrifice.”

Words from one of the great novels of the twentieth century, a novel born out of the nightmare conditions of modern totalitarianism–Pasternak’s Dr. Zhivago. Again and again in this astonishing work, Pasternak returns to the point, the point of vision that gave him his own personal resource to fight back against the pressure to silence and conformity in Stalin’s Russia.

“Something in the world had been changed. Rome was at an end. The reign of numbers was at an end . . .  The story of a a human life became the story of God and filled the universe."
– Rowan Williams, ‘Choose Life, Christmas and Easter Sermons in Canterbury Cathedral’
Posted by mattgunter1081@gmail.com at 6:10 AM No comments:

Incarnation as the interior basis and final cause of creation

On the Ninth Day of Christmas, something from Sergei Bulgakov (1871-1944) who was a significant Russian Orthodox theologian.

God wants to communicate to the world his divine life and himself to "dwell" in the world, to become human, in order to make of humankind a god too. That transcends the limits of human imagination and daring, it is the mystery of the love of God "hidden from the beginning in God" (Eph 3:9), unknown to the angels themselves (Eph 3:10; 1 Pet 1:12; 1Tim 3:16). The love of God knows no limits and cannot reach its furthest limit in the fullness of the divine abnegation for the sake of the world: the Incarnation. And if the very nature of the world, raised from non-being to its created state, does not appear here as an obstacle, its fallen state is not one either. God comes even to a fallen world; the love of God is not repelled by the powerlessness of the creature, nor by his fallen image, nor even by the sin of the world: the Lamb of God, who voluntarily bears the sins of the world, is manifest in him. In this way, God gives all for the divinization of the world and its salvation, and nothing remains that he has not given. Such is the love of God, such is Love.

Such it is in the interior life of the Trinity, in the reciprocal surrender of the three hypostases, and such it is in the relation of God to the world. If it is in such a way that we are to understand the Incarnation–and Christ himself teaches us to understand it in such a way (Jn 3:16)–there is no longer any room to ask if the Incarnation would have taken place apart from the Fall. The greater contains the lesser, the conclusion presupposes the antecedent, and the concrete includes the general. The love of God for fallen humankind, which finds it in no way repugnant to take the failed nature of Adam, already contains the love of stainless humankind.

And that is expressed in the wisdom of the brief words of the Nicene Creed: "for our sake and for our salvation." This and, in all the diversity and all the generality of its meaning, contains the theology of the Incarnation. In particular, this and can be taken in the sense of identification (as that is to say). So it is understood by those who consider that salvation is the reason for the Incarnation; in fact, concretely, that is indeed what it signifies for fallen humanity. But this can equally be understood in a distinctive sense (that is to say, "and in particular," or similar expressions), separating the general from the particular, in other words, without limiting the power of the Incarnation nor exhausting it solely in redemption. The Word became flesh: one must understand this in all the plenitude of its meaning, from the theological point of view and the cosmic, the anthropological, the Christological and the soteriological. The last, the most concrete, includes and does not exclude the other meanings; so too, the theology of the Incarnation cannot be limited to the bounds of soteriology; that would be, moreover, impossible, as the history of dogma bears witness . . .

The Incarnation is the interior basis of creation, its final cause. God did not create the world to hold it at a distance from him, at that insurmountable metaphysical distance that separates the Creator from the creation, but in order to surmount that distance and unite himself completely with the world; not only from the outside, as Creator, nor even as providence, but from within: "the Word became flesh". That is why the Incarnation is already predetermined in human kind.
– Translated by Andrew Louth, The place of theosis in Orthodox theology, in ‘Partakers of the Divine Nature’
Posted by mattgunter1081@gmail.com at 6:18 AM No comments: 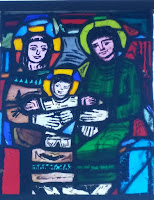 On the Eighth Day of Christmas, we come to the Feast of the Holy Name/the Circumcision of Christ.

Ah! Ah! That wonderful Name! Ah! That delectable Name! This is the Name that is above all names, the Name that is highest of all, without which no one hopes for salvation. This Name is sweet and joyful, giving veritable comfort to the human heart. Verily the Name of Jesus is in my mind a joyous song and heavenly music in my ear, and in my mouth a honeyed sweetness. Wherefore no wonder I love that Name which gives comfort to me in all my anguish. I cannot pray, I cannot meditate, but in sounding the Name of Jesus. I savour no joy that is not mingled with Jesus. Wheresoever I be, wheresoever I sit, whatsoever I do, the thought of the savour of the Name of Jesus never leaves my mind. I have set it in my mind, I have set it as a token upon my heart. What can one lack who desires to love the Name of Jesus unceasingly?
– Richard Rolle (1290-1349)