Bearing with One Another - 6. Free to be Wrong

All human life is marked by frailty, fallibility, brokenness, and sin. None of us is immune. None of us is innocent. Yet, the God we know through Jesus Christ is always offering the healing and forgiveness of his merciful love and calling us into fullness of life, love, peace, and joy. And thus we are free.

Among other things we are free to be wrong. Before you read any further, I encourage you to watch this video:

In this brief lecture, Kathryn Schulz, poses the question, “How does it feel to be wrong?” We all know the feeling. It is usually unpleasant – embarrassing, shameful, etc. It is a feeling we try to avoid. But, Schulz points out that that feeling is not the feeling of being wrong, but the feeling of realizing we are wrong. Before we realize we are wrong, being wrong feels just like being right.

She goes on to point out that while we all acknowledge that we could be wrong in theory, we mostly avoid thinking about the possibility we ourselves might actually be wrong.

It is unsettling to concede that right now there are things about which I am convinced I am right, but about which I am in fact wrong. Of course, if I realize I am wrong, I hope I will adopt a more correct view. But, at the moment I cannot think of a single thing I know that I know I am wrong about. Can you?

Schulz observes that we are, “Trapped in a little bubble of feeling very right about everything.”

Assuming we are right about everything is, of course, presumptuous. But, trusting too much in the feeling of being on the right side of anything is also dangerous. It is dangerous to our own spirits because it is an expression of the deadly sin of pride. And it is dangerous because attachment to our own rightness causes us to treat each other badly – a failure of charity which is also deadly to the spirit.

Given our habitual assumption of our own rightness – morally, politically, religiously, professionally, scientifically, or whatever – we are faced with a problem – how do we explain all those people who don’t see it our way?

Schulz suggests that we typically make three “unfortunate assumptions” about those who do not agree that we are right. We assume they are:

1. Ignorant – they don’t know the facts that we know

2. Idiots – if it becomes clear that they know the facts, but still resist our rightness, we assume they are not smart enough to draw the right conclusion from those facts.

3. Evil – if it is clear they know the facts and are actually quite smart, we resort to the assumption that they are deliberately misconstruing things for malevolent purposes.

4. Fearful – those who disagree with me are afraid of what it would mean for them if I am right.

5. Biased – informed, bright, and well-meaning though they might be, those who don’t see things my way must be blinded by biases that prevent them from coming to the proper conclusion.

It is not hard to find examples of these unfortunate assumptions at work. They are pervasive in our political discourse. And each of them shows up regularly in church debates.

This gets tricky because there are indeed people who comment or act while ignorant of the facts. And some people are brighter than others. And there are people who manipulate information for selfish gain.

But it is also true (unless I am wrong) that some configuration of all five of the above assumptions is true of each of us all the time.

That is why cultivating humility is so essential

"Knowledge puffs up, but love builds up. Anyone who claims to know something does not yet have the necessary knowledge"
(1 Corinthians 8:1-2)

If we want to resist pride and cultivate humility, we will accept the reality that we are wrong. We will look to our own ignorance, lack of intelligence, maliciousness, fear, and prejudice. And confess them. We will take to heart John Calvin's warning, “There is no worse screen to block out the Spirit than confidence in our own intelligence.”

Within the Church, we continue to recognize authorities like scripture and tradition (about which we sometimes disagree in particulars). And, in confessing the Creed, we acknowledge that within the Church some questions are settled.

But humility does mean holding what we think we know with a certain lightness – refusing to presume to grasp equality with God (Philippians 2:3-8). 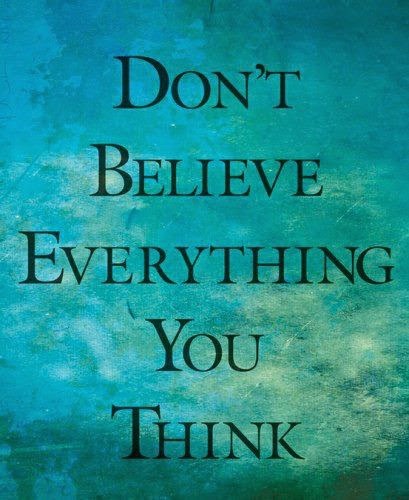 It does mean we will engage others with deep humility.

If we want to live in charity, we will resist the temptation to bear false witness against our neighbor. Rather than making the “unfortunate assumptions” about those with whom we disagree, we will begin by assuming the opposite of those assumptions.

And we will embrace with sincerity the possibility that we are the ones who are wrong.

I suggest that Christians are both bound to practice such humility and charity and freed to do so. We are bound by the commands of our Lord to do so. We are freed to do so by the fundamental reality of grace – God's unshakable love and mercy – that frees us from the obsession with being right and the fear of being wrong.

Perhaps this is what it means to speak the truth in love. (Ephesians 4:15).

1. The truth – as best I understand it and sincerely confessing that I could very well be wrong

2. In love – with gentleness and reverence toward those who I am trying to persuade (1 Peter 3:15). In love – which, by any Christian account, is more important than being right. 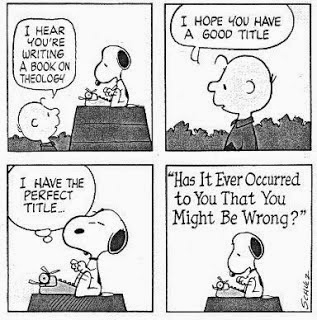 Next: Free to be Vulnerable in Love

Bearing with One Another When We Disagree

2. A Life Worthy of the Calling

5. Gathered Together at the Foot of the Cross
Posted by mattgunter1081@gmail.com at 9:06 AM

Email ThisBlogThis!Share to TwitterShare to FacebookShare to Pinterest
Labels: Bearing With One Another, Humility