Do not conform any longer to the pattern of this world 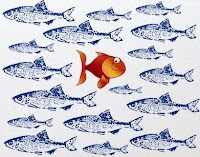 According to a recent report from Christianity Today, America’s favorite Bible verse is Romans 12:2 in which the Apostle Paul encourages Christians to "not conform any longer to the pattern of this world, but be transformed by the renewing of your mind."

Romans 12:2 is a good and provocative verse. But, by itself it does not tell us much. What exactly is the pattern of this world that Paul is warning against? What transformation is he encouraging? What kind of thinking needs renewing? On its own, without any context, Romans 12:2 can be made to mean whatever I want it to mean. But, in our time, it is imperative that we get what Paul is actually talking about. Too much of our political rhetoric and the sentiments it is tapping into conforms to the pattern of this world.

The context of Romans 12:2 – what immediately precedes and follows it – reveals what Paul has in mind. Let’s look at that context:

Therefore, I urge you, brothers, in view of God's mercy, to offer your bodies as living sacrifices, holy and pleasing to God--this is your spiritual act of worship. Do not conform any longer to the pattern of this world, but be transformed by the renewing of your mind. Then you will be able to test and approve what God's will is--his good, pleasing and perfect will. (Romans 12:1-2)

The passage begins with “Therefore” indicating that Paul is drawing a conclusion from what has gone before. What has gone before in the letter to the Romans is Paul’s grappling with the universality of human bondage to Sin and the particular “problem” in his view that his fellow Jews have not responded to Jesus as the Messiah who has come to deliver all humanity from that bondage. At the end of Chapter 11, he declares the wonder of God’s unsearchable and inscrutable mercy in spite of our universal disobedience:

For God has imprisoned all in disobedience so that he may be merciful to all.

O the depth of the riches and wisdom and knowledge of God! How unsearchable are his judgments and how inscrutable his ways!
‘For who has known the mind of the Lord?
Or who has been his counselor?’
‘Or who has given a gift to him,
to receive a gift in return?’
For from him and through him and to him are all things. To him be the glory for ever. Amen.

It is in the context of God’s unexpected and unimaginable mercy that Paul encourages the church in Rome – by the mercies of God – to be living sacrifices, not conformed to the pattern of this world, but transformed by the renewing of their minds.

Paul answers those question in the rest of Romans 12.

For by the grace given me I say to every one of you: Do not think of yourself more highly than you ought, but rather think of yourself with sober judgment, in accordance with the measure of faith God has given you. (Rom. 12:3)

Do not be conformed to this world’s pattern of self-aggrandizement, self-assertion, and self-promotion. Rather, be transformed by humility.

Just as each of us has one body with many members, and these members do not all have the same function, so in Christ we who are many form one body, and each member belongs to all the others. (Rom. 12:4-5)

Talk of love is cheap. Genuine love requires being willing to be a living sacrifice for the sake of the other. The evil we are to hate is never another person. In fact we should be more critical of the evil that arises within our own hearts.

Never be lacking in zeal, but keep your spiritual fervor, serving the Lord. Be joyful in hope, patient in affliction, faithful in prayer. (Rom. 12:11-12)

In a world full of despair and grievances, given to complaining; be hopeful, patient, and prayerful. Be patient in affliction – maintaining love and joy, peace and gentleness toward all.

Share with God's people who are in need. Practice hospitality. (Rom. 12:13)

The pattern of this world is to celebrate wealth and the accumulation of stuff along with a vigilant guarding of what we consider our own. With that comes a resentful and suspicious spirit toward those in need. Paul summons us to be transformed by generosity and detachment from worldly wealth and possessions.

Rather than be conformed to the pattern of this world with its suspicion of those who are other or different or unknown, we are to be transformed by open-hearted hospitality to strangers. Surely this includes our Muslim neighbors as well as others.

In a world where cursing opponents is the norm, be transformed by the practice of blessing even those who persecute you. Paul had no illusions that this was easy. He knew real persecution. Still, blessing and not cursing are essential to the transformation Paul is talking about. If we are to bless and not curse those who are actually persecuting us, how much more those who merely make us uncomfortable because they differ from us? Anything else is conforming to the pattern of this world.

Live in harmony with one another. Do not be proud, but be willing to associate with people of low position. Do not be conceited. (Rom. 12:16)

Associate with those who are lowly – the poor, the weak, the marginalized, those who others are attacking.

And then it gets even harder:

Do not repay anyone evil for evil. Be careful to do what is right in the eyes of everybody. If it is possible, as far as it depends on you, live at peace with everyone. Do not take revenge, my friends, but leave room for God's wrath, for it is written: "It is mine to avenge; I will repay," says the Lord. On the contrary: "If your enemy is hungry, feed him; if he is thirsty, give him something to drink. In doing this, you will heap burning coals on his head." Do not be overcome by evil, but overcome evil with good. (Rom. 12:17-21)

Can anything be more counter-cultural and otherworldly than this? In a world where vengeance is the operative motivation for the main characters in much of our entertainment? Where vengeance animates our attitude toward those by whom we feel threatened? Where violence toward those we don’t like is justified and rationalized? In a world where politicians have recently played on our fears and suspicions of those different from us?

Again, Paul is not being sentimental here. He has no illusions about what he is calling us to. He had real enemies. As did Jesus who said the same thing.

We are to show kindness to our enemies – food and drink, etc. The line about burning coals probably means embarrassing or shaming our enemy when we return good for evil, by out-loving them. Perhaps that will lead them to repent making reconciliation possible.

Dare we in our day return good for evil? This is hard. But, the alternative is to conform to the pattern of this world – the pattern of division, hatred, vengeance, and violence.


Responding to God’s unsearchable and inscrutable mercy, do not be conformed to the pattern of this world, but be transformed by the renewing of your minds and extend that mercy to others, learning the hard discipline of overcoming evil with good – with generosity, hospitality, patience, and peace. That is what it means to be “living sacrifices, holy and pleasing to God--this is your spiritual act of worship.”
Posted by mattgunter1081@gmail.com at 11:44 AM

Email ThisBlogThis!Share to TwitterShare to FacebookShare to Pinterest
Labels: Church