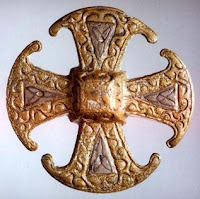 "Every Christian communicant volunteers for translation into the supernatural order, and is self-offered for the supernatural purposes of God. The Liturgy leads us out toward Eternity, by way of the acts in which [we] express [our] need of God and relation to God. It commits every worshipper to the adventure of holiness, and has no meaning apart from that."
– Evelyn Underhill

As has been the case with many others, one of the things that drew me into the Episcopal Church and the Anglican tradition was the liturgy.

Liturgical worship has come usually to mean worship that is structured and follows a set pattern as opposed to forms of worship that seem less structured and more spontaneous. It is a style of worship Anglicans/Episcopalians share with the Roman Catholic Church, the Eastern Orthodox Churches, and the Lutheran Church. It is not the kind of worship I knew growing up. But, when I first experienced it, I was hooked.

I was taken with the poetry and drama of it all. Here was worship that incorporated beauty. There was a sense of majesty and mystery. There was room for wonder. There was a sense of being caught up in the glory of God who was transcendent yet incomprehensibly near. There was an intimation of something deep and true and eternal. Though I had grown up going to church and have much to be thankful for in that heritage, I remember feeling like I was worshiping for the first time.

The liturgy directed my attention away from myself – including my obsessive questioning – and focused it on the mystery and wonder of God. It focused my attention on the life, death, and resurrection of Jesus. It opened me up the the promise of New Creation in Christ. It wasn't about my felt needs or conscious concerns. It was about my need to get out of and beyond myself and into “the bracing atmosphere of God” (Evelyn Underhill).

Related is the way the liturgy emphasized the communal over the individual. For one thing, it wasn't about whatever the pastor or worship team cooked up for a given Sunday, but something more rooted and enduring. Even more, it was about common worship–the people gathered together to offer petitions, thanksgiving, confession, and praise. I remember being struck by how different were the prayers of the people which called on the participation of the people from the pastor-centered prayers I had grown up with. Receiving Communion from a common cup reinforced the understanding that belonging to Christ meant we belonged to one another. It was less about me and Jesus than us and Jesus

And because the liturgy is less sermon centered, there were multiple avenues for the Holy Spirit to get my attention. The sermon might be good or bad, the hymns might be wonderful or just OK, the receiving of Communion might be more or less profound, but generally the Spirit would break through somewhere. Or it might be simply hearing the scriptures read, or the recitation of the Creed, or the Confession/absolution, or the passing of the peace, or some phrase or idea in the Eucharistic Prayer. Certainly, now that I am a regular preacher and celebrant, it is freeing to know that it doesn't all hang on whether I am 'on' as a preacher on any given Sunday.

Receiving the bread into my outstretched hands and sipping wine–wine!–from a common cup reinforced all of this. And wine. I remember feeling it infusing my chest as I swallowed. So different from the shot glass of communion grape juice I had grown up with. There was an awareness of its potency. And, indeed, the idea that Christ is somehow really and transformatively present in the bread and wine is potent indeed. The mystery of God was made mysteriously tangible. The weekly Eucharist became and remains a central and essential aspect of my piety.

I appreciated the weekly recitation of the story of salvation contained in the Eucharistic Prayer.

I was moved by the history represented and the sense of worshiping with the Church of the ages.

I was also moved by the full-sensory aspect of worship which included sight, sound, smell, and taste.

Kneeling for confession and for receiving Communion was profoundly instructive.

I have come to experience the liturgy as an elaborate spiral dance in which we symbolically circle around and around the altar, like Moses approaching the Burning Bush, drawing closer to the exuberant, self-giving, eucharistic Mystery at the heart of all who calls us to “the adventure of holiness.”


Liturgy does not guarantee spiritual vibrancy or holiness. Certainly one can find Episcopal churches (or Roman Catholic, Orthodox or Lutheran) that, on the surface at least, give little evidence of the presence of the Holy Spirit. And it would be misleading to claim that every time I participate in liturgical worship I am aware of a profound spiritual experience of the bracing atmosphere of God. But, then, the liturgy reminds me that it is not really about my experience anyway. I do know that over time I have been formed and transformed by participation in the liturgy. 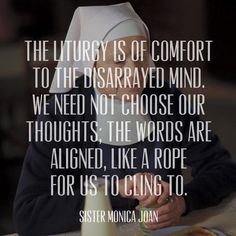