Then Peter came and said to him, “Lord, if another member of the church sins against me, how often should I forgive? As many as seven times?’” Jesus said to him, “Not seven times, but, I tell you, seventy-seven times.” – Jesus (Matthew 18:21-22)

In the last post about mercy, we saw that God's mercy is comprehensive and that being a follower of Jesus means extending that mercy to all others. Among other things, that means a call to a radical discipline of forgiveness. (In addition to the above, see Matthew 18:33-35, Mark 11:25, Luke 6:37-38, Colossians 3:12-13) 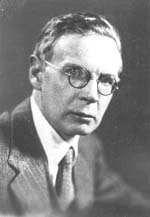 Charles Williams (1886-1945) was a member of the Inklings, the literary discussion group that included J. R.R. Tolkien and C. S Lewis. He is a favorite of mine. He was an editor and authored several strange, but wonderful “supernatural thrillers”. He was also a lay theologian – mostly self-taught, idiosyncratic, but orthodox. He wrote several theological books and essays. His writing style is not always easy to follow, but what he has to say is almost always wise, evocative, and worth the trouble.

The following is from Williams’ book, The Forgiveness of Sins, which he dedicated to the Inklings. It was originally part of a series of books that included The Problem of Pain by C. S. Lewis. It was published in 1942, in the thick of World War II. The point he makes is no less challenging or pertinent for Christians today:

Forgiveness is not normally a thrilling or an exciting thing. The metaphor which our Lord used has a particular aptness--it is the taking up, the carrying, the Cross, not the being crucified: it is the intolerable weight of the duty, and not its agony, which defeats us--'the weight of glory'. – p. 192-193

Forgiveness of all injuries is demanded of the Christian because of the nature of our Lord, and it is demanded entirely. The phrase ‘things that cannot be forgiven’ is therefore to him intellectually meaningless. But it may in fact mean a good deal all the same. It is true that few of us are, fortunately, in a position to understand that meaning; no injuries of which the forgiveness seem unbelievable have ever been done to us. But probably there are at the present moment more persons alive in Europe than for many generations to whom such injuries have been done. . . . The massacres, the tortures, and the slavery, which have appeared in Europe of late that have impressed themselves upon us. In the ruined homes of Rotterdam–or indeed of England–among the oppressed thousands of Poland, there are those to whom the phrase ‘things that cannot be forgiven’ has fearful meaning. Must they nevertheless be forgiven? They must. Must vengeance, must even resentment, be put off? It must. There is certainly a distinction between the desire for private vengeance and the execution of public justice. But there is no excuse for concealing private vengeance under the disguise of public justice. . . .The injury done to many in this kind of war is greater than the injury done to one in private, but the result, from a Christian point of view, cannot be other. That must be, everywhere and always, the renewal of love. But in such states as we are now considering, that renewal means little less than heroic sanctity. It is upon such heroic sanctities that the Church depends–depends in the sense that they are the rule, its energy, and its great examples. . .

Heroic sanctity is required perhaps to forgive, but not to forgive is ordinary sin. There is no alternative; the greatness of the injury cannot supply that. It becomes–an excuse? No, a temptation: the greater the injury, the greater the temptation; the more excusable the sin, the no less sin. – p. 165-167

Many reconciliations have unfortunately broken down because both parties have come prepared to forgive and unprepared to be forgiven. Instruction is as badly needed in this as in many other less vital things; that holy light which we call humility has an exact power of illumination all its own. – p. 193

How often do I make excuses for my hardness of heart and weakness of will? How often to I give in to the temptation not to forgive? How often do I refuse to acknowledge that I am the one in need of forgiveness? How often does my mercy fall far short of the mercy of God?

Email ThisBlogThis!Share to TwitterShare to FacebookShare to Pinterest
Labels: Forgiveness, Mercy and Delight