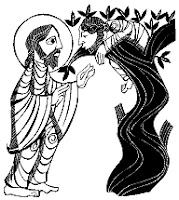 In the summer of 1987, I taught English for five weeks in China. While there, I had the chance to visit Mount Tai which, according to tradition, is the holiest mountain in China. It is a remarkable place. There is a wide staircase carved into the rock from the base of the mountain to its peak. For hundreds of years, pilgrims have been coming from all over China to climb those steps.

As you climb the steps, there is a growing sense of age and history. Along the way, there are places where poetry and quotations from Chinese classics have been carved into the faces of cliffs and even behind waterfalls. There is a plaque commemorating the visit of an emperor that dates back two thousand years. At the top of the mountain, there is a Buddhist monastery and shrines dedicated to various Taoist deities.

As you climb the stairs of Mount Tai, you see trees with rocks balanced on their branches. Each rock represents a prayer brought to the mountain. Sometimes there are two, three, or four rocks of different sizes lined up on like sparrows on a branch. Pilgrims place their prayer rocks on the branches of the trees of Mount Tai hoping that maybe here those prayers will be answered.

It was the first time I had ever been to anything like an official pilgrimage site. Of course, there are many such sites in the world: Mecca, The Ganges, Canterbury, Walsingham, Rome, Jerusalem and the Holy Land. Sometimes, a pilgrimage is not to a site, but to a person: the Pope, the Dali Lama, or someone like Desmond Tutu. In any event, these places and people are considered a little more transparent to the Holy Mystery. People visit them to make some kind of connection and be transformed by that Holy Mystery.

Zacchaeus went on a sort of pilgrimage. He didn't travel far. He didn't climb a mountain. He did climb a tree. He was an unlikely pilgrim. A tax collector, he was willing to sell out his own people to make a buck. He sided with the forces of occupation and oppression. Hardened and cynical, he knew the way things work. Words like goodness, love, and justice were only words. They had no currency in his line of work. You have to look out for number one. That's what Zacchaeus had done. And he had done it well, thank you very much. He was no petty tax collector. He had been employee of the month so often he was given his own franchise. If you could say "Bah! Humbug!" in Aramaic, it might have been his motto.

No, Zacchaeus was not a likely pilgrim – or a likely candidate for conversion and transformation. Certainly, his neighbors had written him off. Yet, somewhere in the back of his mind, or the bottom of his heart, there is a nagging, a sense that all is not right. There is brokenness and guilt behind the cynical mask. In spite of all his wealth, he feels bankrupt. Somewhere he has lost his way, if he ever had a way that was not already lost. He has grown weary of his life, but sees no way out. He is alone. He is lost.

Then, along comes this man, Jesus, a man with a reputation for changing lives, for healing, for forgiveness, and for restoration.

But, Zacchaeus is still unsure. It is as much a surprise to himself as to anyone that he finds himself perched in a sycamore tree. He is waiting expectantly – apprehensively wedged in the branches like a prayer. Can change happen here? Can this holy man do it? Zacchaeus has come seeking Jesus. He is on a pilgrimage.

But, Zacchaeus is not the only pilgrim in the story. He is not even the primary one. Jesus is also on a pilgrimage. "The Son of Man came to seek out and to save the lost." God, in the person of Jesus, came into this world on a pilgrimage. Like all pilgrims, Jesus was seeking to make a connection with what was important to him, with what he loved. Unlike other pilgrims, he came not to seek the holy, but to bring holiness and wholeness to others.

To his surprise (and everyone else's dismay) he hears Jesus say, "Zacchaeus, hurry and come down. For I must stay at your house today." There was something in that voice, something in the eyes that made the invitation impossible to refuse. Maybe it was the shock of being loved when he had become so unlovable. Maybe it was a sense of judgement in the presence of one so good. Maybe it was the realization that they are two sides of the same coin.

Whatever it was, Zacchaeus let Jesus into his home. He let Jesus into his heart. And transformation occurred. Zacchaeus was reconnected with God. He was reconnected with his neighbors. And the combination of those two connections disconnected him from his attachment to his wealth. He paid back those he had cheated at 400% interest. He gave half of the rest to the poor. Zacchaeus had been lost, but now he was found. He had been lost, but now he was saved.

But here also, the real pilgrim is still Jesus. The destination of his pilgrimage is each of us. Before we thought to seek him, he has come seeking us. He comes bringing holiness and wholeness. He looks to each of us and says, "Hurry and come down, for I must stay with you today." The risen Lord still comes to seek out and to save the lost. To seek out and to save you and me.

Email ThisBlogThis!Share to TwitterShare to FacebookShare to Pinterest
Labels: Sermons