Mercy – Seraphim of Sarov & the burden of one another 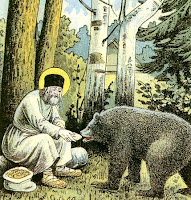 “Acquire a peaceful spirit, and thousands around you will be saved.”
– Seraphim of Sarov

Seraphim of Sarov is not widely known in the West. But, he is an intriguing and inspiring saint. He has sometimes been referred to as the Russian St. Francis given his humble way of life and unusual relationship with wild animals. For years, he lived in an isolated hermitage where

Only the birds and the wild beasts visited him, and he dwelt with them as Adam did in Paradise. They came at midnight and waited for him to complete his Rule of prayer. Then he would feed bears, lynxes, foxes, rabbits, and even wolves with bread from his hand. St Seraphim also had a bear which would obey him and run errands for him.

Here is another story from his life that I find particularly interesting and edifying:

One day, three robbers in search of money or valuables once came upon him while he was working in his garden. The robbers demanded money from him. Though he had an axe in his hands, and could have put up a fight, but he did not want to do this, recalling the words of the Lord: "Those who take up the sword will perish by the sword" (Mt. 26: 52). Dropping his axe to the ground, he said, "Do what you intend." The robbers beat him severely and left him for dead. They wanted to throw him in the river, but first they searched the cell for money. They tore the place apart, but found nothing but icons and a few potatoes, so they left. The monk, regained consciousness, crawled to his cell, and lay there all night.

In the morning he reached the monastery with great difficulty. The brethren were horrified, seeing the ascetic with several wounds to his head, chest, ribs and back. For eight days he lay there suffering from his wounds. Doctors called to treat him were amazed that he was still alive after such a beating. For the rest of his life Seraphim walked hunched over and in pain.
(This and the quote above are borrowed from here.)

Years passed and Serapim’s reputation as a holy man grew. Eventually, he began to receive visitors offering them spiritual counsel as well as physical and emotional healing. One morning,

Seraphim’s three aggressors [the three who had beaten him so badly years ago] appeared on his clearing. They were led by a huge one with a red face, who sobbed like a child. When Seraphim ran forward to greet them, they fell on their knees and touched the ground at his feet with their foreheads.

“Forgive us, man of God, forgive us and tell us what penance we must do. Lord have mercy upon us! Shall we leave our families, journey to the Holy Land, chasten our sinful flesh under the monk’s habit?

Seraphim raised them up from their knees. “Go back to your families and your work; strive to be loving to your wives, children, parents, and to each other, to all. You’ll find it hard enough. Try to be of good cheer and sin no more. I’ll do penance for you, I’ll carry your load on my back. Go in peace.”
– Flame in the Snow by Julia de Beausobre, P. 104

For the rest of his life, Serphim carried a bag of rocks slung over his hunched-over back. When he returned to life in community he substituted a large, heavy iron cross around his neck. He thus bore the burden of his attackers.

Beyond his simple life and communion with animals, there is a Franciscan intensity to Seraphim. That is to say, he took the radical mercy of Jesus more seriously than most. I am moved by the tenderness with which Seraphim treats his former attackers and the gentle charge he lays on them which he admits they will find hard enough. But, more, I wonder at his offering to do penance for them.

I am not sure what it might mean to do penance for someone else’s sins. But, I do appreciate what I take to be Seraphim's recognition that we belong more intimately to one another than we are often inclined to admit. If indeed we are "the body of Christ and individually members of it" (1 Corinthians 12:27), I wonder if bearing one another's burdens (Galatians 6:2) might also mean bearing the burden of one another. How often do we distance ourselves from the "burden" of others who we find burdensome? How different would disagreements in church (at any level) – or, for that matter, family and political disagreements – look if we understood those with whom we disagree as members of ourselves whose burden we are to bear? Even when bearing with them weighs on our hearts like a bag of rocks over our shoulder? Would we be as quick to relish exposing the latest outrage or foible of our foes? Would we speak of them with derision and disdain? Would we dismiss their questions and concerns with contempt? What if we, like Seraphim, attempted penance on behalf of those with whom we disagree or who we find most disagreeable? Or at the very least what if we practiced bearing the load that is the other for the sake of our own souls?

Here are a couple more quotes from Seraphim of Sarov

You cannot be too gentle, too kind. Shun even to appear harsh in your treatment of each other. Joy, radiant joy, streams from the face of one who gives and kindles joy in the heart of one who receives.

God is a fire that warms and kindles the heart and inward parts. Hence, if we feel in our hearts the cold which comes from the devil – for the devil is cold – let us call on the Lord. He will come to warm our hearts with perfect love, not only for Him but also for our neighbor, and the cold of him who hates the good will flee before the heat of His countenance.

Email ThisBlogThis!Share to TwitterShare to FacebookShare to Pinterest
Labels: Mercy and Delight